Home » Blog » The Truth about Concussions 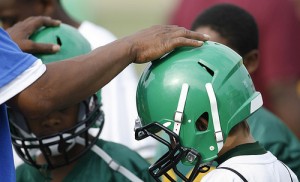 If you’ve turned on a television, radio or surfed the web over the past few months, chances are you’ve come across information about the danger of concussions. As a personal injury attorney and former hockey player (who someday hopes to have a little hockey player of his own) I find myself drawn to these issues and stories like the one below.  I am pleased that concussions (one of which I sustained while playing hockey in college) are starting to finally get the attention they deserve.

Most recently, concussions have been the buzz in the wide-world-of-sports, especially in the NFL and youth football.  For example, more than 4,500 retired NFL players were recently awarded $765 million in a settlement with the league over a suit for brain injuries suffered on the field.  The suit alleged that the NFL concealed information about the long-term dangers of concussions and did not properly care for head injuries suffered by players, resulting in long-term neurological ailments like Alzheimer’s, chronic encephalopathy, and dementia.

As personal injury attorneys, we’ve had many people ask us if there is any real risk for their children who play football and other contact sports.  Unfortunately, the answer is yes.  There is always a risk that aggressive activities could result in injuries.

Simply stated, a concussion is a form of traumatic brain injury (TBI).  Obviously the risk of long-term injury and more severe traumatic brain injury increases with every concussion. And to be sure, there is a real risk of sustaining brain injuries while playing football (as well as other contact sports like soccer, hockey, and basketball).  But knowledge is power and is often the key to complete recovery and avoiding a more serious injury in the future.

Traumatic brain injuries, like concussions, can be caused by a blow to the head that disrupts the brain’s normal functioning; or, can occur if the head travels forward-and-back or side-to-side too quickly. This latter injury is commonly referred to as a cou-contra-coup injury.  Because the brain floats in cerebral fluid, it is designed to float and move inside the skull. However, if the body is shaken violently—in a car crash or sporting event, for example—the brain can crash into the skull which can cause either minor, temporary injury or severe-permanent injury.  This video shows exactly how a cou-contra-coup injury occurs:

While helmets do protect from superficial damage (like cuts and skull fractures), and cushion some of the impact, they will likely never eliminate the possibility of traumatic brain injuries as a result of extreme impacts.

For parents, athletes and coaches, it is important to recognize the symptoms of concussions and take the proper precautions. These include, but are not limited to:

It is essential that athletes remain at rest until all concussion signs and symptoms have gone away and have been gone for some time. Returning to the sport too early can make the concussion even worse, whether there is another impact or not.

The truth is, unfortunately, concussions and other traumatic brain injuries can be sustained in a wide variety of ways and, while the spotlight is currently on football, all activities carry the risk of concussions.  Whether it be skiing, snowboarding, wake boarding, a slip and fall on ice or even in the grocery store; all of these activities could result in a concussion or TBI. If you or a loved one believe you have suffered a brain injury in a car accident, fall or contact sport, it is critical that you contact a physician immediately.  If you believe you have suffered this type of injury as a result of someone else, you may need experienced guidance from a personal injury attorney.